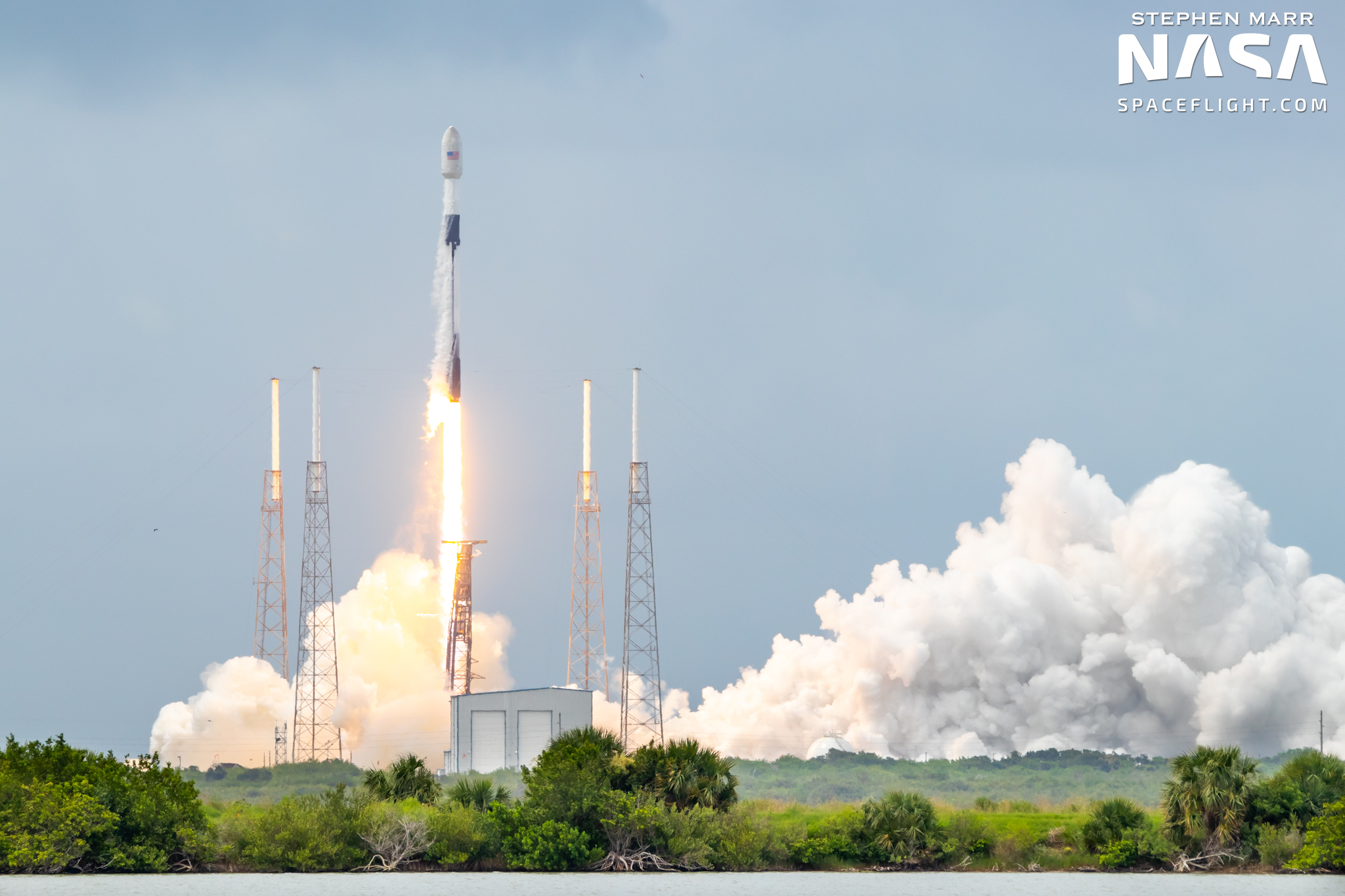 At 18:27 UTC (2:27 p.m. EDT) on May 25, SpaceX is scheduled to launch yet another Falcon 9 rocket. Lifting off from Space Launch Complex-40 (SLC-40) at Cape Canaveral Space Force Station, Falcon 9 will carry several dozen payloads to a sun-synchronous orbit for the Transporter-5 rideshare mission. The flight will feature a somewhat rare return to launch site (RTLS) landing, with the first stage touching down at Landing Zone-1 at Cape Canaveral.

Transporter-5 is the fifth dedicated rideshare mission for SpaceX. These rideshare missions are intended to compete with other smallsat launch companies in the aerospace industry such as Astra and Rocket Lab, which utilize small launch vehicles to give smallsat payloads a dedicated flight.

The Falcon 9 booster that will be used on the Transporter-5 mission will be booster 1061-8. It launched for the first time as part of the Crew-1 crew rotation flight in November 2020. It then flew on other missions including Crew-2, SXM-8, CRS-23, IXPE, Starlink Group 4-7, and most recently Transporter-4.

The eighth launch of booster 1061 will mark the one-hundredth launch of a Falcon 9 Block 5 rocket. The Block 5 variant of the Falcon 9 had its maiden launch with booster 1046, which launched the Bangabandhu Satellite-1. Block 5 is set to be the last major variant of Falcon 9.

Booster 1061-8 is notable as it has supported the most NASA missions of any first stage, making up four flights of the booster.

Prior to launch day, the Falcon 9 atop the Transport Erector — or T/E — was rolled out from the Horizontal Integration Facility at SLC-40. It was moved to the pad and raised vertical.

The launch auto sequence will start at T-35 minutes prior to launch, meaning that  propellant loading operations on the Falcon 9 will begin with the loading of RP-1 on both stages of the rocket.

Also at the same time, the loading of Liquid Oxygen (LOX) begins in the first stage. LOX loading on the second stage will start later, at T-16 minutes.

A sign of an impending Falcon 9 launch — a long vent of excess oxygen from the T/E — will occur at the T-20 minute mark prior to launch. Simultaneously, the loading of RP-1 on the upper stage of the Falcon 9 will be completed.

Falcon 9 rolls out to SLC-40 ahead of the first GPS-III mission. Credit: SpaceX/US Air Force

At T-4 minutes and 30 seconds prior to liftoff, the T/E will begin to retract to the launch position. Next, the Falcon 9 will enter startup a minute prior to liftoff, when the vehicle takes control of the rest of the countdown.

At T-3 seconds, the nine Merlin 1D engines on the first stage will ignite. At T-0, the hold-down clamps on the reaction frame of the T/E will release and the Falcon 9 will lift off from SLC-40. Soon after launch, the vehicle will roll to the proper launch azimuth and will begin to pitch downrange of the launch site.

While the vehicle is ascending, the Falcon 9 will make a “dogleg maneuver” as it avoids overflying Florida. This launch will use the polar launch corridor, which has been used by SpaceX since the SAOCOM 1B mission in 2020. The corridor had previously been unused between 1969 and 2020.

First stage booster 1061-8 will then perform a flip using its onboard nitrogen gas thrusters. After this, the booster will conduct a boostback burn by igniting three of its nine Merlin 1D engines. A second burn — the entry burn — will occur a few minutes later to slow the vehicle down as it begins to reenter Earth’s atmosphere.

The southern trajectory of this launch will take the Falcon 9 second stage close to the eastern coast of Florida. The vehicle will come closest to the coastline near West Palm Beach.

At around this time, the two fairing halves on the second stage will separate, exposing the plethora of payloads to the vacuum of space. The halves will later be recovered by one of SpaceX’s recovery ships after splashing down under a parachute in the Atlantic Ocean around 600 km downrange of Cape Canaveral. 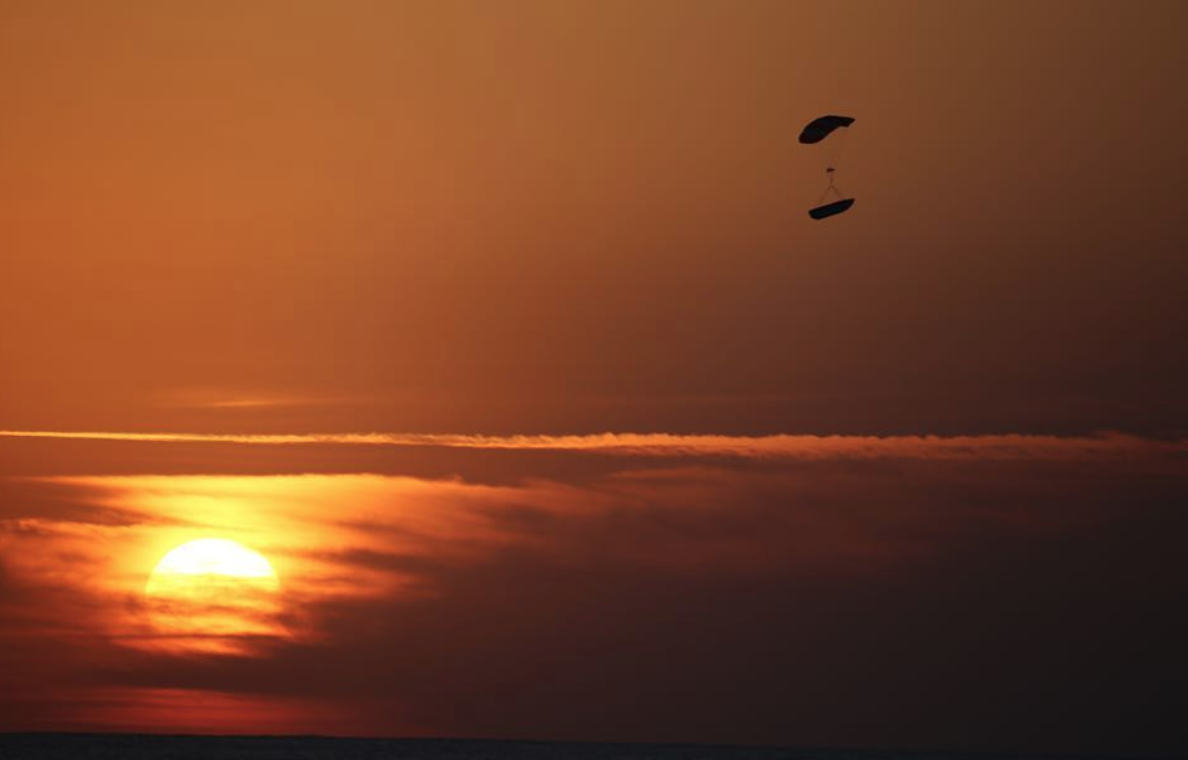 Half of a payload fairing returns to Earth via parachute. Credit: Elon Musk

LZ-1 was built on the former site of Launch Complex 13 at Cape Canaveral. The pad hosted test launches of the SM-65 Atlas intercontinental ballistic missile and other Atlas rockets between 1958 and 1978. The site was demolished to make way for the construction of LZ-1 and LZ-2.

Meanwhile, the second stage will overfly the island of Cuba as it heads south on a near-polar launch trajectory.

The Transporter-5 mission will feature a multitude of rideshare payloads. This includes the Sherpa-AC orbital transfer vehicle from Spaceflight Inc which will be injected into a 525 km Sun Synchronous Orbit. 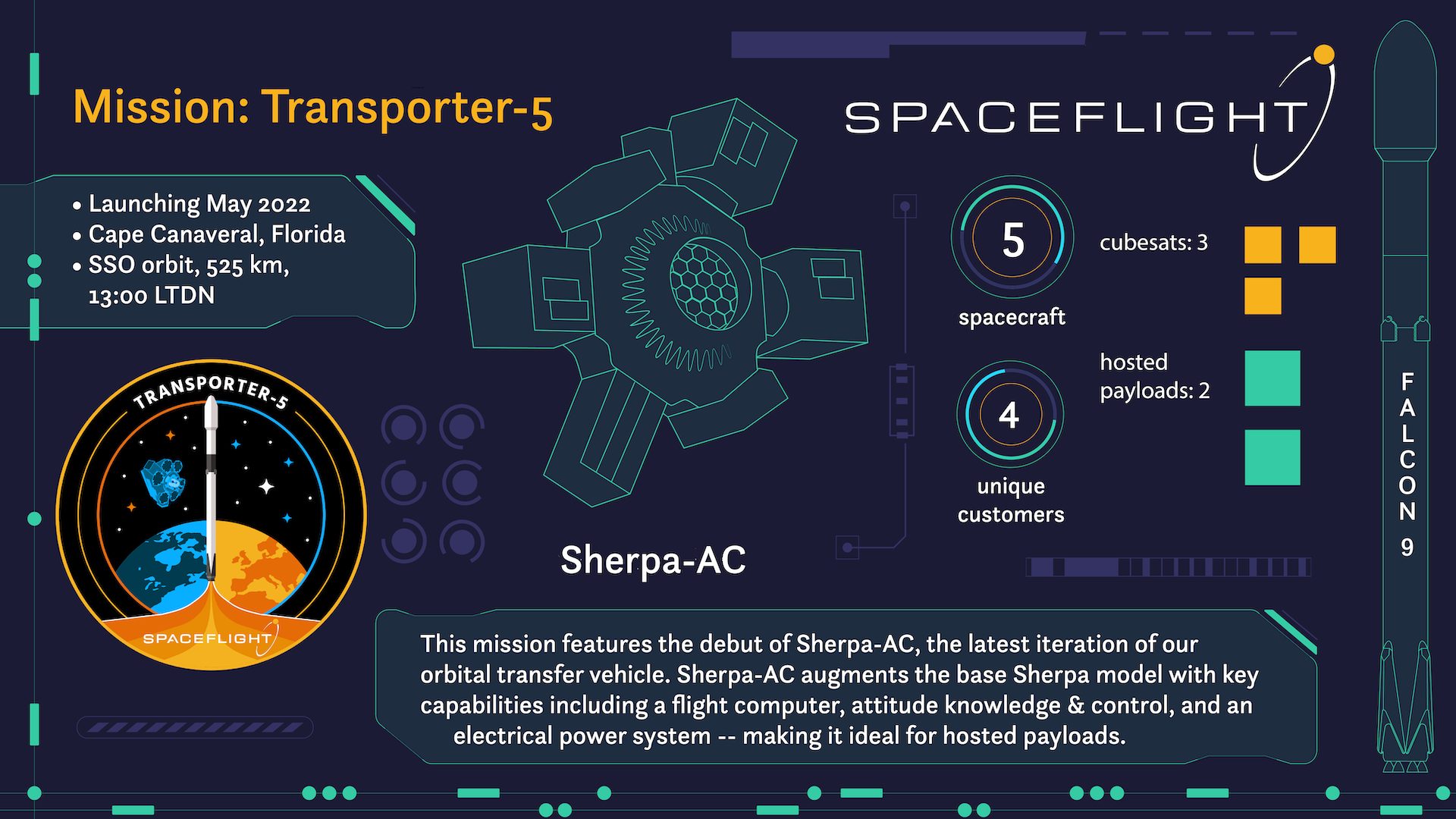 An infographic made by Spaceflight of the Sherpa-AC which will launch on the Transporter-5 mission. Credit: Spaceflight

The Sherpa-AC will carry two hosted payloads from Xona Space and NearSpace Launch. Spaceflight will also manage the deployment of three spacecraft for MIT Lincoln Laboratory and the Missile Defense Agency. This is the first flight of the Sherpa-AC, which is a new variant of Spaceflight’s Sherpa spacecraft that has attitude control but not propulsion.

The flight will also carry the Italian space tug ION SCV-006 built by D-Orbit which will carry additional CubeSats. Another tug is the Momentus VR-3 which will carry multiple CubeSats and PocketQubes.

Also onboard will be NASA Ames’ Pathfinder Technology Demonstrator-3 spacecraft, which will feature the TeraByte InfraRed Delivery (TBIRD) system. This payload will demonstrate new methods in laser communication to achieve a record-breaking 200-gigabit per second data transfer rate.

Space lasers have never been this fast.

Our TeraByte InfraRed Delivery system, or TBIRD, will ride aboard @SpaceX’s Transporter-5 and downlink data at the highest optical rate ever achieved by @NASA — 200 gigabits per second! Sounds like fun, fun, fun: https://t.co/PPHEKMaU1I pic.twitter.com/6AOv8k6DT6

Most spacecraft use radio waves to communicate, however laser (or optical) communication is a maturing technology that is planned to be used on future crewed and uncrewed missions, including the upcoming Lunar Gateway.

A number of other payloads, some currently unknown, will also fly on Transporter-5.